Notan - the balance between light and dark


The concept of Notan comes to us from the Japanese, where it literally means Light-Dark. It is the balance between light (white) and dark (black) in a figure, where neither color dominates or is subordinate to the either. Each is defined by the other and the viewer can switch between looking at the black or white figure, without a clear right way. 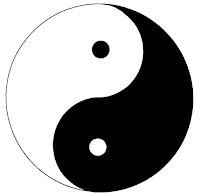 The most familiar Notan image is the Ying-Yang symbol and the philosophy it symbolizes also fits perfectly with Notan: male and female, light and dark - they complement each other and lose meaning alone. If we remove the white from the symbol, what would we have left?

The concept of "switching" the views was not natural to me and I struggled with the concept until I remembered this figure. A simple representation of a cube, made from lines or wire, known as a Necker cube. Is it facing up or down? I love this image and I never had any problem switching between the views. Once I had this in mind, I was able to see both values in Notan with no difficulty.

The concept of Notan can also be used to analyse Western art - how the light and dark shapes in a painting, for example, interact. I find Van Gogh a great example of this. In this oil painting of a field, we can focus on the lighter paths or concentrate on the dark figures and fields. 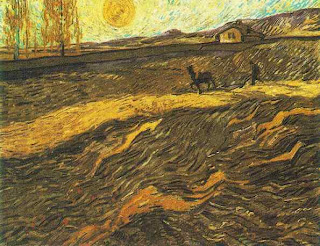 From here, it is simple to extend the concept to sculpture (the solid spaces and the empty spaces of a piece), to architecture, to quilting, etc.

Posted by Beatriz Fortes at 12:09 AM No comments: